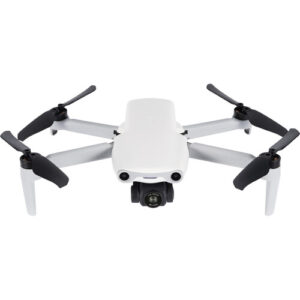 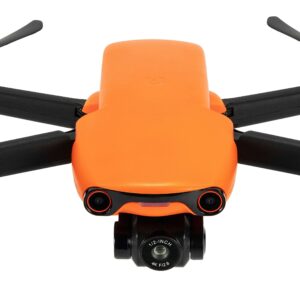 With a foldable design and weighing only 8.8 oz, the standard version of the red EVO Nano+ Drone is a go-anywhere, fit-anywhere solution that lets you easily take to the skies to capture pro-quality aerial images and video. The Nano+ does this through a 1/1.28″ CMOS sensor inside a 3-axis gimbal for images up to 50MP and videos up to 4K30p Ultra HD quality. Thanks to a dual PDAF+CDAF autofocusing system, large aperture, and RYYB color filter array, the camera can more easily keep fast moving objects in focus and deliver low-light content with minimal noise.

The Nano+ has been designed to make it easy to capture cinematic content with four automatic shooting modes, automatic subject tracking, and a suite of video templates in the Autel Sky app. Even with all of this automation to make piloting easy, you’re still in control with the included remote and Skylink, which transmits what the drone sees at a stunning 2.7K30p resolution from up to 6.2 miles away. With up to 28 minutes of flight time, you can stay at a safe distance while capturing beautiful aerial footage of remote locations.Premium BundleThis is the premium version of the MODEL. Compared to the standard version, this bundle includes two extra batteries and pairs of propellers. Also, the premium bundle provides exclusive accessories such as a multi-charger, propeller holder, and shoulder bag.HDR ModeIn this mode, multiple images are captured at different exposures while filming. The area is automatically processed together in a final result that pulls out the maximum amount of detail and rich contrast.Four Automatic Shooting Modes

SkyPortraitThe Nano+ will take to the air and snap a group portrait, automatically adjusting the lens so no one gets left out. You can also choose to blur the background or not.Dynamic Track 2.1The Nano+ can automatically track and follow a moving person, animal, or vehicle, letting you focus on other tasks.SkylinkView what the drone sees as you pilot with Skylink. Skylink is designed to transmit with minimal interference, sending brilliant 2.7K30p video to y our smartphone from up to 6.2 miles away.SoundRecordRecord voices and ambient sounds on the ground through your phone to provide narration audio to edit into your final content.Autel Sky AppMany functions are available in the Autel Sky app to enhance your content and productivity. For example, it provides video templates and the ability to add filters and a soundtrack. It also has SuperDownload, a feature that lets you wirelessly transfer images and videos from the drone by simply placing your smartphone nearby. It can transfer files at up to 160 Mb/s.Obstacle AvoidanceEven in this compact form factor, the Nano+ offers three-way binocular obstacle avoidance cameras. They view and detect objects in front, behind, and below the aircraft, allowing the drone to automatically avoid them to prevent a crash.