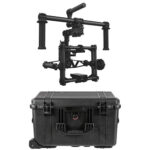 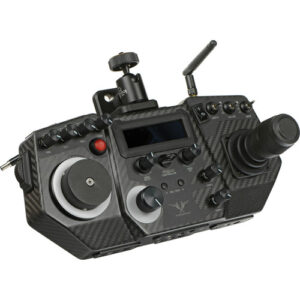 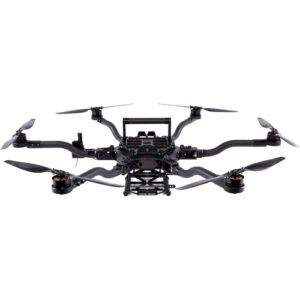 The MoVI M5 3-Axis Gimbal Stabilizer with Travel Case from Freefly is exclusively available as part of the MoVI M5 Adventure Edition bundle and includes the MoVI M5 hand-held stabilizer and a Pelican hard case with a custom-cut foam interior designed to fit the stabilizer and the components of the Adventure Kit.

Supporting loads up to 5 lb, the MoVI M5 provides camera stabilization using three motors and an IMU (inertial measurement unit) to detect and counteract unwanted movement along three axes: pan, tilt, and roll. In particular, compensating for handshake or vehicle-induced vibration and reducing translation. The included quick release system consists of one female Toad in the Hole Quick Release Adapter for the MoVI and a Male Toad Adapter to be attached to your support device. A second Male Toad Adapter is also included in this kit.

The system supports single- or dual-operator control. In single user (Majestic) mode, the system’s software intelligently differentiates unwanted shake or vibration from intentional movement, such as panning, while keeping the horizon level. Alternatively, you can have a dedicated operator using an optional remote controller/transmitter who is in charge of camera pan, tilt, and roll. In this configuration the camera will always point where the operator of the transmitter tells it to, independent of how the rig operator moves.

As with sled-style stabilizers, the camera should be balanced on the MoVI to ensure best performance. Once balanced, the MoVI will need to be linked via Bluetooth to an Android mobile device or a computer or tablet running Windows to finalize the configuration process.

Two lithium-polymer batteries and a charger are included, as well as a top handle for low-angle shooting or transporting the assembled rig on set. The MoVI M5 and its included accessories can be safely stored and transported inside the included Travel Case, which features a Pelican-made hard-shell exterior and custom-cut foam interior.Supported CamerasFor DSLRs such as the Canon EOS-5D Mark III, Nikon D800, and Panasonic GH4 as well as select compact cinema cameras weighting up to 5 pounds total, including the lens. Large DSLRs such as the Canon EOS-1DC will not fit and typically exceed the specified weight limitMajestic ModeFor single-operator use. In this mode the gimbal provides stabilization without counteracting operator-directed camera movements–the camera goes where you point the handles. This mode is ideal for accurate framing in tight situationsDrift Free HorizonThe gimbal uses a GPS-assisted IMU that when used outdoors with available satellite signals is able to minimize drift even when under acceleration–such as where the camera is mounted on a UAV or vehicleLive Wireless Tuning and GraphingA real-time Bluetooth wireless link is provided by the gimbal which transmits performance data for live adjustment of any of the gimbal parameters using software for Windows or AndroidSilent DriveThe motors driving the gimbal have been designed to operate as quietly as possible to ensure you will be able to record sound without picking up any unwanted noiseTranslation CompensationMaking hundreds of adjustments per second, the software works to counteract translation–the bobbing up and down effect while running–when tracking a moving subject moving at high speed. In this situation translation may be unavoidable, but at least the subject will remain in-frameShot RecorderKeeps a record of the camera position (where GPS is available), height, camera pan, tilt, and roll so that the shot can be recreated later or to help Visual Effects align the live action shot with other elements in a CG compositeThird-Party MountingUsing separately available mounting hardware it is possible to mount the MOVI on cranes, jibs, Steadicams and similar vest-supported stabilizers (where it corrects for angular error), and other camera support hardware. It has also been verified to work on an EasyrigRemote Firmware UpdatableYou can upgrade the gimbal to new software features as they are released by Freefly yourself, without having to send the device in for a factory updateCustom Direct Drive MotorsThe MOVI system uses motors that were custom made for the gimbal rather than re-purposing off-the-shelf partsM5 Travel Case