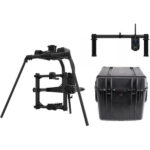 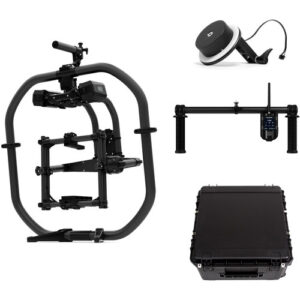 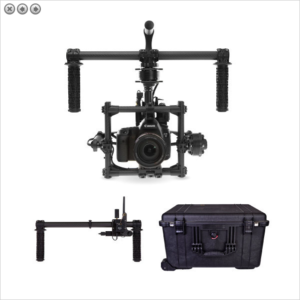 Those of you familiar with the MoVI M10/M15 will enjoy the familiar ability to execute eye-level shots without much fatigue, to fully integrate with the camera and accessories, plus to execute diverse shot types (hyperlapse, timelapse, motion control, mimic, etc.). You will also retain smooth footage due to MoVI’s 3-axis lens control. Gimbal setup is an easy process with this device.

Utilizing a 3-axis compass for accurate heading information, the world’s smallest 3-axis lens control built into the camera stage, and silent sine drive technology, the MoVI Pro includes the bells and whistles required to ramp up your gimbal work. The MIMIC controller allows the camera to automatically and intuitively follow a user’s movements with internal gimbal motors. The MoVI Pro’s drive technology offers smooth, fast, closed loop control of pan / tilt / roll axes. In addition, you won’t need to fumble for a stand or worry about the integrity of your timelapse footage since a stand is incorporated into the MoVI Pro.

Our Nic Somera caught up with Freefly at NAB 2017 to review the MoVI Pro and other new products in his video blog. In the interview, we learned that the MoVI Pro includes stronger motors than previous versions which helps it to operate under tough conditions, such as flying sideways. There is also an integrated screen on the back of the MoVI Pro to provide vital information such as estimated battery usage, status info, and ability to alter configuration on the fly. A four button system offers navigation of the built-in app directly on the MoVI Pro or you can use the MoVI Pro App or an optional MoVI Controller to control the unit.

Performance Highlights of the MoVI Pro:

MōVI Pro can flip from upright to inverted mode with a quick 180 degree roll. You can remove the top handle.

The addition of an embedded display with a 4-button control system grants users command over basic tuning and adjustments on the fly without the need for additional devices.

Internal wiring is now strain relieved and internally routed to prevent potential damage to cables and enhance reliability in a variety of weather conditions.

Per the manufacturer, you can go from handheld to aerial in less than 60 seconds. With dual GPS antennas, lightweight construction, high torque motors, and an integrated FIZ driver, the MōVI PRO is unmatched in aerial performance.

The addition of dovetails, revised camera mounts, easier top mounting, and a wide-body design results in an ultra-versatile, lightweight camera rail that can easily be mounted and removed.

One handed battery swaps and hot swapping are now possible through a redesigned battery system which is built to keep the MōVI Pro shooting continuously.

Power for Over an Hour

The MōVI Pro can power itself, the camera, and more for over an hour before swapping by using the combined power of two 22.2V batteries.

Refined new software allows the MoVI Pro to find optimal stiffness and filter settings within seconds on a button push. While the system can be further tuned manually, the new self-tuning algorithm makes the tuning process more automated and accurate from the start.

Integrated REDLink Command Protocol grants users full control over RED EPIC and RED SCARLET camera adjustments. This includes when the user is hundreds of feet away from the mounted camera.

Download the latest version of the MoVI Pro App to your mobile device from the Apple Store or Google Play.

NOTE: Fully build your camera package prior to balancing it on the MoVI Pro. This includes any added accessories. Otherwise you may need to rebalance the unit.

The MoVI Pro Landing Gear kit from Freefly Systems allows you to add lightweight, robust, and aerodynamic landing gear to your MōVI Pro for use with the Freefly ALTA aerial devices.

This landing gear attaches in under 5 minutes so you can change from handheld to aerial fast. It features a robust yet lightweight carbon and aluminum design. Once installed, the 15mm legs quick release to allow for fast switching from GroundView to SkyView.

The Freefly Systems Bush Pilot is a compact knob with a joystick and slider which quick releases the MIMIC (sold separately) so several people can work together to control the footage you capture. The Bush Pilot provides users the ability to control Focus, Iris, or Zoom on the FIZ driver. You can assign one user the focus, for example, while another controls iris and zoom. Freefly intends this as the first in a series of control accessories to execute the shots your want.

Pair the Bush Pilot with any MoVI Pro or MIMIC running at least 1.2 firmware. It draws little power from the MIMIC and will not greatly reduce the MIMIC’s run time.

During NAB 2017, Nic Somera featured the Freefly Systems products. In his video blog, Freefly described the Bush Pilot as a modular MoVI Controller. Check out his Freefly Updates video blog to view the MoVI Pro interacting with the Pilot and MIMIC. That video includes a configuration with a shoulder harness where the MIMIC intuitively captures fast motion and it is reflected on the MoVI Pro gimbal.

The Bush Pilot knob cannot currently be reversed, but Freefly states they may consider this change in the future, if there is enough interest. Tag them #FreeflyBushPilot and #AbelCine on social media to tell them what you want.

It includes a 13mm quick release mount and a wire to connect to the MIMIC Controller.

NOTE: Once you set end points of your focus wheel the first time you plug it into your MIMIC, you will not need to reestablish that every time. If you swap the Bush Pilot between MIMICs, then you will need to calibrate prior to operation.

WHAT’S IN THE BOX